Japaese4all has organized several shinbokukai (a ‘let’s get to know each other’ gathering) and now plans to arrange them on a regular basis.

The meetings are held in a Japanese restaurant and the aim is that students have a chance both to meet each other as well as Japanese people while enjoying Japanese food and drink.Shimbokukai
This meeting is strictly for those who are willing to speak just Japanese – in other words no other language should be spoken. To make our shin-boku-kai as useful as possible – and of course enjoyable – students were asked to bring:
(1) a couple of photos that you would like to talk about
(2) a 2-minute self-introduction in Japanese in which you can talk about eg your hobbies and your reasons for studying Japanese so that students have as much chance as possible to talk to different people we also moved round.

An evening of Japanese conversation – James

One of the best aspects of my lessons with Udagawa-sensei is that they are one-to-one, so I benefit from intensive and dedicated tuition each week, which is structured to my needs and goals.
But having lessons on my own does mean that I don’t usually get to meet any of the other students who are also benefiting in the same way from Udagawa-sensei’s teaching. That is one of the reasons why he recently arranged a get-together for his students.
The get-together was called a shin-boku-kai (which, roughly translated, means a party for making new friends). For extra authenticity, it was held in a Japanese restaurant in central London. Udagawa-sensei imposed just one rule on the students who attended the party: they could communicate only in Japanese for the whole evening. To encourage everyone to adhere to this rule, Udagawa-sensei invited, and encouraged his students to invite, native Japanese speakers, who were then strategically interspersed with the students.

The result was that we all had a fantastic opportunity to practise what we had learned in our lessons by engaging, to whatever degree our progress with the language permitted, in conversation with fluent Japanese speakers for an entire evening. Despite some initial reticence, all of the students soon relaxed under the influence of the enthusiastic Japanese guests and a growing party spirit.
Throughout the evening everyone did their best to adhere to Udagawa-sensei’s one rule. The experience gave us all a very clear idea of what we have achieved so far in learning Japanese – which was very satisfying – and also of how much we can still improve and learn – which was daunting, but inspiring.

The shin-boku-kai was not the first get-together arranged by Udagawa-sensei for his students. There have previously been a bonenkai (end of year party) and a shin-nenkai (new year party). The format is always the same, with the same rule about speaking only Japanese. Because, after all, that is the main point of the evening – together, of course, with the chance to meet fellow students and to share our experiences of Udagawa-sensei’s teaching and the knowledge of the language it has given us.
These parties are always fun, as well as being a rare and very valuable opportunity to practise Japanese conversation with native Japanese speakers in a social setting. I am sure that all of those who went to the shin-boku-kai are looking forward to the next get-together and another occasion to put into practice what we have learned in our lessons with Udagawa-sensei.

An invaluable chance to practice what we had learnt, but also a very enjoyable evening! – Simon

I attended my first Shimbokukai having completed about 10 lessons, and just before a first trip to Japan since my starting to learn with Udagawa-sensei. 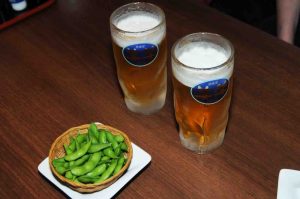 As you can imagine, it is hard not to feel slightly nervous going into an environment where to begin with you know only one other person, and that is your teacher who is telling you in no uncertain terms that you can only speak to the others in Japanese!
I was struck almost immediately, however, by the friendliness and supportiveness of everyone there, both native Japanese speakers and students, and the fascinating range of backgrounds, interests and abilities present.
Helped by some excellent Japanese food and beer, I can say without reservation that I came away not only with a bit more confidence in my own ability to speak and understand Japanese, which had begun to develop through the lessons, but also with a sense of having spent a really nice evening out with people who I would happily meet for a beer and some good Japanese conversation any time.
It really provides the best form of encouragement to see what other students have achieved.

Although we were looking forward to the shin-boku-kai it was also a daunting prospect as Kazuo sensei encourages the party to speak only in Japanese the whole time!
However, soon any feeling of trepidation disappeared as everyone was so friendly and willing to wait while you thought through what you wanted to say. Moreover it was held in an excellent restaurant, so there was much food to share and talk about.
We had all prepared a few simple things to talk about beforehand, which also eased us into the evening, and shortly after the start of the evening we were listening to each others stories and lapping up new words and sentences.
We took away some top advice – to watch lots of Japanese TV! Looking forward to the next one (with only mild apprehension now!)