How I passed N1- Sasha

I chose to study Japanese at Edinburgh University; an experience which I think gave me the best insight into Japanese life -the study abroad programme. Being a Scottish university, we were allowed to pick three different subjects to study in the first two years, and therefore the Japanese I learnt during this time was very basic grammar, kanji, and essay writing skills.

The “real” Japanese study came in my third year, when I spent one year studying at Ritsumeikan University in Kyoto.
Suddenly I found myself in advanced Japanese classes which were incredibly challenging; these involved giving presentations, reading novels, writing academic essays, debating, and advanced grammar. 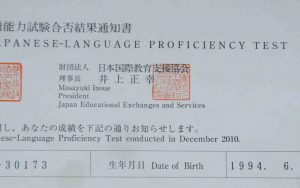 I was also given the choice to attend normal lectures, and although it was extremely difficult to follow the lectures at first, I found that over the year, it was gradually getting easier and I thoroughly enjoyed studying such a variety of subjects.

Now, although much studying came from inside the classroom, most of my “everyday” Japanese came from normal day-to-day life in Kyoto.
Of course, this included interaction with Japanese friends at school (through the tennis club and their “buddy” system), but I wanted to get to know Japanese people of all ages and backgrounds.
Therefore, I took the opportunity to teach voluntarily at a local primary school, and got a part-time job teaching conversational English. There were some cultural differences which became apparent through life in Japan ? for example, us international students had to accept that most Japanese people were not as frank as Western people, and therefore we found it difficult to work out what Japanese people were really thinking inside.

Returning to Edinburgh, my fourth year was primarily focused on Japanese studies, such as history, modern and classical literature, but we continued the language study through translation classes, writing and listening classes.
I would have liked to have had more lessons in Japanese rather than lectures in English, but I kept up my language acquisition through private study.
This was due to the fact that I had signed up for the Japanese Language Proficiency Exam Level 1, and so I bought a JLPT textbook and worked my way through.
It was extremely challenging, and I found myself writing out lists of new vocabulary and kanji, which I practiced over and over again. However, I don’t think it is possible to pass the test by solely studying from this textbook.
The fluid and fast conversational Japanese in the listening exam, or the slight nuances from the use of subtle vocabulary or grammar, can only really be learnt from living in Japan and using it every day.

Now, having successfully passed the JLPT Level 1 and completing my Japanese degree, there was only one thing for me to do – go and work for a Japanese company! I didn’t want to undo all of the work I had done at university, and I knew there was still so much more to learn, especially in the way of advanced vocabulary on topics such as business, economics or politics. Therefore, I now work at the London office of the Nikkei, where I am pleased to be speaking Japanese every day.

I now also have a new aim to pass the JETRO Business Japanese Exam which will test me on more practical usage of Japanese, something I felt the JLPT lacked.
With the business Japanese lessons I am now getting, along with working in a Japanese office, I hope that I will continue to improve so that I may return to Japan with total confidence in the future.