Some students do not equip themselves with a firm knowledge of the grammar.
As a result they cannot compose well-structured sentences.
Quite often, they have learned some grammatical functions incorrectly.
This is especially the case with students beyond intermediate level:
I came across one student who kept saying kashikomari-mashita（かしこまりました。） which she thought meant “I fully understand your argument”.
However, this means “I understand your instruction, so I will make sure that it will happen.”
Others have never employed the “Verb-Te ageru/kureru/itadaku, etc” structures, or “favour-receiving/giving structure” because there is no corresponding structure in English.

This is one of the most common problems because native Japanese do not speak like the speakers on tapes/cds.
In the classroom teachers usually speak sufficiently slowly so that students understand. Even when teachers speak quite quickly, students can ask them to slow down and teachers kindly do so in a controlled voice and using limited structures! 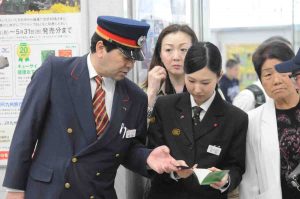 This will create a very comfortable atmosphere for the students and give them the illusion that the same thing will happen in Japan.
However, native speakers are not trained and do not know how much they should slow down or how to simplify their structures.
I know many students who spent time in Tokyo and came back disappointed because they did not understand what a lot of Japanese people had said to them.

To place students in as realistic a situation as possible I often deliberately speak quickly or play a selection of types of tapes to expose students to a variety of voices/speeds/accents/uncontrolled structures so that students realize and can be prepared for how quickly and differently native Japanese speak.

Some study Japanese in romaji only ie without learning the Japanese script.
Thus pronunciation problems are likely to develop: the consonant “N” is one of the most common problems.
People reading romaji do not realize that there are two possible ways of reading Kinen: きねん（ki – nen、近年） or きんえん（kin – en、禁煙）, which means commemorative and non-smoking respectively.
When these are written in hiragana – one of the Japanese scripts – it becomes very clear.
One student’s heavy regional accent caused him a headache when he went to Japan because he was taken by a taxi driver to かみやま（Kamiyama、神山） when he meant かめやま（Kameyama、亀山).

Lack of vocabulary and kanji

Regardless of your level, these two aspects of Japanese studies – vocabulary and kanji – are almost always a problem to students.
My solution is to teach them in context. I have a database of what I call ‘core-text / conversation text’. These texts are either grammar construction based or topic based. 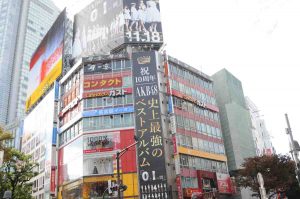 For example, some texts focus on one particular grammatical construction such as indirect passive or keigo, while the topic-based text illustrates how Japanese shop assistants talk to customers in department stores.
These texts, therefore, can illustrate particular verbs that are frequently employed in passive constructions or illustrate specific vocabulary that you need when shopping such as ‘what floor’ or ‘ a book selling department floor’.
We study these texts carefully so that students get a good idea of how they are employed. Then, through various exercises that are repeated at regular intervals over the weeks, students can gradually develop a good range of kanji and vocabulary.
I have learnt from experience that students learn vocabulary and kanji better from a meaningful text rather than a series of short statements, which are not related each other.

Well-organized lessons keep students clearly aware of what is being taught and they feel a sense of achievement every time they learn a new linguistic element.
If lessons proceed in a step by step manner most students can concentrate for up to two hours and they feel that the time passed quickly.
However, even with well-planned lessons, some students cannot concentrate for long.
For example, I had one student, a trader in one of the best-known investment banks, who found it hard to forget his job/work he was doing and focus on the lesson.
Because he was not really listening to me/concentrating he started making mistakes and then swearing because he got cross with himself. 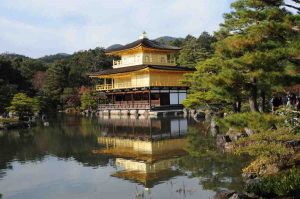 Some concepts are difficult to understand because they are foreign to Europeans.
One of them is the so-called “indirect passive voice” which is used to express annoyance by Japanese people.
Japanese people often see themselves as victimized by the force of uncontrollable circumstances.
Another foreign concept is “Keigo（敬語）” or the super-polite form.
In Japan, occupations such as teaching and civil servants are seen as deserving respect and this sentiment is realized linguistically in sentences with the use of a specific vocabulary.

The Japanese are passive in expressing their sentiments.
When one talks about his/her ability; for example, the ability to remember so many kanji (Chinese characters), one can say this in at least two different constructions.

The subject of the construction (1) is the agent- “I” who actively makes the effort and achieves the target of remembering kanji. In this construction the agent is seen as active and contributes to the outcome. 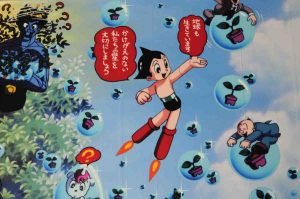 This results in an English sentence such as “I can remember so many kanji!”
However, this is not what Japanese people do.
Japanese prefer (2) construction in which they seem to be saying that “I am made capable of learning so many kanji.” Or “I do not do any active effort on my own, but some unknown outside force caused me to learn what looks impossible.” This results in “Takusan kanji ga oboerareru!”（[たくさん漢字がおぼえられる。」 Notice when a Japanese person achieved a remarkable outcome, they often say “Okagesama de”（「おかげさまで。」）, which literally means ” Your caring shadow made me achieve this!”

Masculine/feminine forms and tones of voice

There is a distinctive difference between how men and women speak Japanese which becomes clear with the use of particles at the end of main sentences/clauses to add an extra linguistic element:
Two of these particles are kashira かしら and wa わ, which are typically used by female speakers to denote “suspicion” and “surprise” respectively.
Male students who have learnt from their Japanese girl-friends sometimes copy these traits, but as a result sound strange to other Japanese. 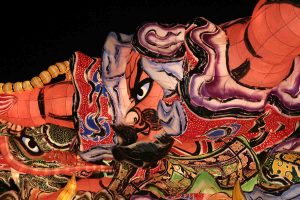 Japanese females often speak with a high-pitched voice and use interjections, such as honto (本当！） (really) or shinjirarenai （信じられない。） (unbelievable), but these would sound strange coming from a man.
One example to illustrate this is when I heard Gambarimasu がんばります from a male student who had just his first lesson with me. The way he said this phrase, which is frequently used by both men and women in Japan and which means:
“I will do my best.”, gave me a very strange feeling because I felt that I was being teased.
I wondered why I felt so and came to the conclusion that his high-pitched tone implied he must have copied this from his Japanese wife.
He discussed this with his wife and realized that he had a feminine tone, after which he used a deeper pitch.

There are some distinctions in the use of nouns/verbs/adjectives/suffixes between male and female speakers. For example, めし meshi (cooked rice) is solely used by men when they would like to project a masculine image whereas female speakers say ごはん go-han . There are two suffixes ご GO and お O , which can be placed in front of some nouns to project politeness, and these suffixes are more often employed by female speakers.

Students who go to Japan on business often have problems with a lack of business-related vocabulary but also find it difficult to understand what middle-aged Japanese businessmen are saying as they speak in a deep, low voice so it seems as if they are mumbling.
The fact that I am a middle-aged Japanese man makes it easier for me to help students prepare for this.

Apart from the obvious reasons why doing homework makes a difference to the speed of learning , a learner’s determination to commit himself/herself more to the process accelerates the acquisition of communication skills. 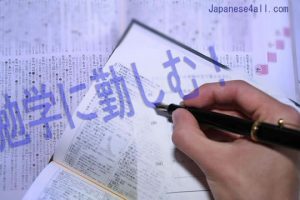 This makes you realize that you are the one who is accountable for your successful learning and you must make an effort on your own to achieve that goal.
This mental attitude is reflected in the process of learning in class.
The person who does homework tends to be able to concentrate more and to try to get more out of the class.

Some students rely heavily on an English-Japanese dictionary.
They assume that there are corresponding similarities between English and Japanese. This assumption encourage them to compose Japanese as if it were a collection of wooden bricks. However, this often means they produce hen na Nihon-go (変な日本語） (very strange Japanese phrases/sentences).
For example, if someone wants to know how to say “Please boil the water” and used a dictionary, they would probably say Mizu (water) o wakashite (boil)（水を わかして。）.
However, in Japanese there is one single word oyu （お湯） which means ‘hot water’, and we say Oyu o wakashite（お湯をわかして！）, which literally means “Please boil the hot water”.

A lack of vocabulary and kanji (Chinese characters、漢字) are commonly observed among European students whereas Chinese and Korean students find these fairly easy to deal with.
Students who can speak English, French or Spanish find this rather problematic because there are very few words commonly used between Japanese and these languages. 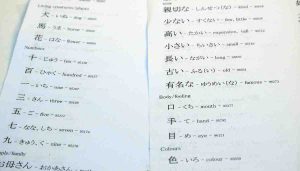 Some students who do not have much contact with Japanese people tend to avoid increasing their knowledge of vocabulary and kanji（漢字） and focus on grammar and culture which they find relatively easy to deal with.

This is one of the commonly observed problems among post-intermediate students, who have learned all the basic grammatical functions. Some students are not aware that there is a pair of similar verbs that function differently – ie transitive verbs take objects and intransitive do not. The English equivalent to this is, for example, ‘raise’ and ‘rise’, transitive and intransitive respectively.
You can not say “The sun raises in the east.” because the verb “raise” is a transitive verb so it need to take an object as in ” The sun raises the temperature in the daytime. ”
In Japanese, there are quite a number of pairs that have to be distinguished as intransitive and transitive.

Some students come back from Japan having been exposed to Japanese and they tend to believe they have acquired a good command of the language.
They usually learned to speak and to listen through oral communication, which can be generally characterized as informal/unstructured. In informal communication, fluency is more important than accuracy because the people involved would like a smooth flow of conversation.
This causes problems when they decide to take structured lessons in London with the aim of passing exams. These students tend to stick to their limited grammatical structures and repeat the same mistakes over and over again.
It is often the case that they find it difficult to eradicate these mistakes because they have been embedded in their language knowledge.
These students find it hard to develop advanced language skills without restructuring grammatical knowledge.