In February 2012 I was asked to teach a boy aged 18, who had studied Japanese in one of the most prestigious private schools in the UK.

Thus, the aim of the lessons was to enable him to pass this exam with as high a mark as possible at the end of this May. The level assessment showed that his knowledge of kanji (Chinese characters) was beyond A2, but he was very weak at organising his essays. Based on this we set out four major targets to achieve. They were to develop his essay-writing skills, to increase his range of vocabulary, to be able to employ specific grammatical constructions , and to practise translating from English to Japanese. 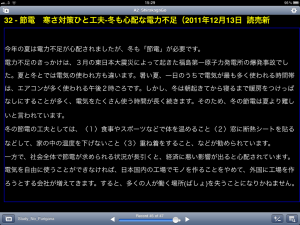 The last week of this programme was for him to try the past A2 exam papers, and from my point of view, we completed the task very successfully. The result of this is summarised in an email from his father below.

‘Firstly thank you for your excellent work with Joe. He feels so much stronger in the subject, and importantly he also very much enjoys learning with you.

To be honest he – and we – are thinking mostly about the exam next week rather than what comes after. But personally I think there is indeed value in strengthening his communication / speaking skills before he goes to Tokyo. I just haven’t explored with him what he would like to do on this, or indeed discussed his own summer holiday plans!

Let’s get past the exam on Tuesday, I wil discuss with him and then come back to you. Again, thank you for your support. I genuinely am very pleased indeed with how things have gone. ‘ – May 26th, 2012

The boy studied with me for about three months or for about 60 hours. He will sit the exam the day after tomorrow.
Kazuo Udagawa – May 27th, 2012. Then I received an email from him on August 17th 2012 as below.

Dear Mr Udagawa, I am happy to inform you that I received a 97% score and an A* grade for the Japanese A-Level exam. Thank you very much for all of your help. – Summer 2012